VASSAL is a great tool to play your favorite boardgames with the people from around the world. As I am a great fan of the Commands & Colors System, I am very often taking part in various tournaments. These are mainly C&C Ancient ones – Mini Tournaments, EPIC Tournaments or Open Tournaments, but I also took part in C&C Napoleonics, Samurai Battle and The Great War ones. The source and center for all of these is a great website run by Alessandro Crespi – https://www.commandsandcolors.net/.

Today I would like to share with fellow Readers the report from latest Mini Tournament run for The Great War game – already a fourth one.

The subject of the Tournament was a Cambrai battle – mainly large or very large (from 8 to 10 victory banners) scenarios played using Expansion 1 – Tanks. As for the battle itself, that was a struggle fought in 1917 on Western front. The battle prove a very good example how well-deployed tanks – used in large groups – can be a devastating force on the front line. On the other hand it also showed vulnerability of those machines to mechanical breakdowns – thanks to which a huge German counter-attack almost fully neglected initial British gains – details on maps below: 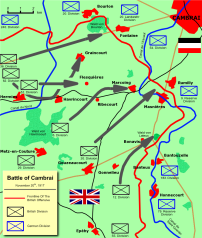 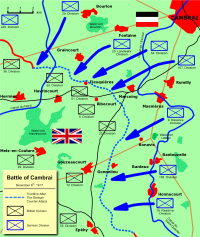 We were divided into two groups, each containing 3 players. We were playing against all the opponents in another group (German Group), comparing the results of players within our group (British Group). All three scenarios were to 8 banners, and the most fierce for me was with Mark McG – 131 – Cambrai (Fontaine-Notre-Dame):

After that bitter beginning I won next two games – with Viridovilas and gcallarigw – which gave me 20 points in total and allowed to move to semi-final. And there…

…EZPickins was already waiting for me! We were to play another huge scenario – 132 – Cambrai (Bourlon Village & Wood) – this time to 9 victory points. In semifinals and finals we play one scenario twice, switching sides so you will see two games below:

I was lucky to win both games marginally 9-8 – first leading Germans and then British. These were very close games and it could go any way!

In the final phase I again played against Max, i.e. Viridovilas. The 130-Cambrai (St. Quientin Canal) was the largest and most demanding of all the scenarios – to 10 victory points:

Congrats to Max and I am eagerly awaiting another Mini Tournament, hopefully this time with the French Expansion!

PS. Additionally, all tournament details can be found here: