So I have spent exciting 15 sessions with Brute, playing the Gloomhaven campaign and I would like to share some of my ideas and observations regarding that class. What follows is my subjective take on that character strengths and weaknesses, suggested equipment as well as card deck composition. Hope you will find it useful!

The name of the character – Brute – speaks for itself. The character is an unstoppable and savage melee creature, who storms into the new rooms, soaking up huge amounts of damage and dealing the same to opponents. While enemies focus on you, more brittle, long-range, high-damage classes can take care of opponents in the meantime.

You are a front-liner – and this is true whether you are going more into the direction of a tank or a damage-dealer. Thus your equipment should also reflect this. Also, I find the initial items suggested by the rulebook quite useful and actually started with them:

With time you will gain much more gold which should be invested into: 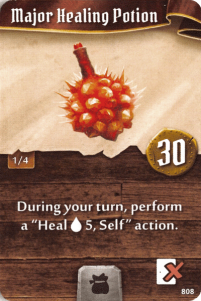 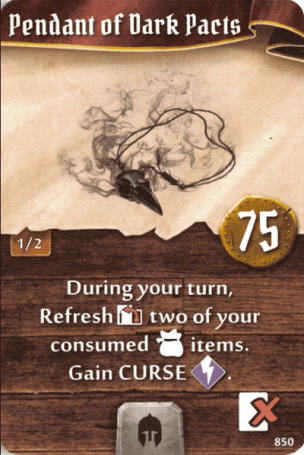 Of course, there should be also a piece of equipment for the head – thanks to one of the scenarios I got hold of Pendant of Dark Pacts and I found it much better equipment then any kind of helmet. I was able to refresh two consumed items – great combo with my Potions!

The heart of the game are cards. They actually reflect the play-style of the character and in what direction you would like to develop it. So let us see what I decided to choose – for sake of readability, all below images when you click on them opens enlarged in the new window.

As for initial choice, it is easier to say what you left behind as poor cards. Mainly, I discarded all retaliate cards – they are very situational and you never know when you play them, if they will have good usage – I prefer simply attacking then waiting to be hit 🙂 That is why Eye for Eye and Wall of Doom are quickly put aside. As for Overwhelming Assault I had some more doubts. In the end I made a decision that I had enough loss cards in the deck plus low initiative (61) here made it unfit for my playing style.

I finished my gameplay on level 7 and so in the end in my last scenario my hand looked like this:

With that in hand I felt comfortable facing any type of enemy!

As far as perks are concerned, you should definitely start with those three:

These three are fundamental – later on you may add +1 cards or some rolling effects. With time, your deck will be much more green and resilient to negative cards but risk of drawing “Null” will always exist.

There are tons of them and I hope you would help me finding more in comments 🙂 The obvious ones which I often used:

I will be missing that straightforward class – simply bursting into the enemies, wreaking havoc, slashing around and taking multiple hits. Usually no finesse, quickly closing on monsters and ripping guts from them. That was fun, a lot of fun but now it is time to try more subtle play-style – this time Angry Face.