Gloomhaven is already three years old and we will have to wait another year for Frosthaven. But the epic world created by Isaac Chidres can’t stand a vacuum so it is not a surprise we got in the meantime another product – just recently published Gloomhaven: Jaws of the Lion.

So what this new title represents? First, it is a standalone game that takes place before the events of Gloomhaven. As author says, it is aimed at a more casual audience to get people into the gameplay more quickly. How to do it? All of the hard-to-organize cardboard map tiles have been removed, and instead players play on the scenario book itself. Nice idea! The last barrier to entry — so learning the game — has also been lowered through a simplified rule set and a five-scenario tutorial that will ease new players into the experience. Not to mention special introductory cards (which you will be able to see on the pictures). 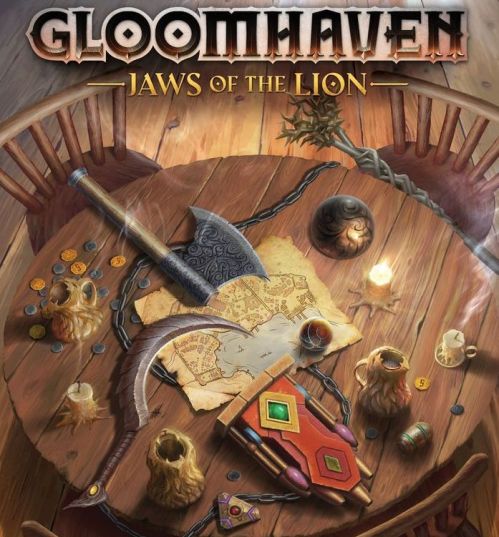 As these are the most interesting to everybody pieces of the game, I will focus on them in my articles. First two characters today! 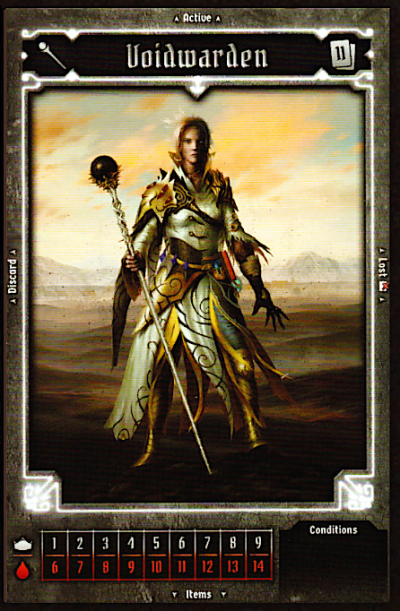 The Void is a dangerous and terrible place. Anything that enters it dissolves into a coarse, black sand without explanation or remorse. After a near-death experience with the Void as a child, which scarred the left side of their body, the Voidwarden made it their duty to protect others from similar fate. Being touched by the Void has left more than just physical scars, however. They can channel the power behind the Void to manipulate the thoughts and actions of both allies and foes. The Voidwarden can also offer powerful boons of healing and stamina, but those gifts usually come at a terrible price.

A brittle character, very good as support and pretty decent as mind-control. Should play very well with tanks and especially damage dealers (both melee and range) as it can grant blesses and strengthen. I am especially fond of abilities allowing other players to take action during the Voidwarden turn or forcing monsters to attack each other 🙂 Can be relatively fast (initiative 15) as well as pretty slow (initiative 89) which, if well combined, can give him/her two actions in a row. What is worth noticing is pretty large hand – with 11 cards that character will be able to survive even through longest scenarios.

While completely not my style, I appreciate that thematic and intriguing traveler of the Gloomhaven world. I definitely would like to have him in my company. 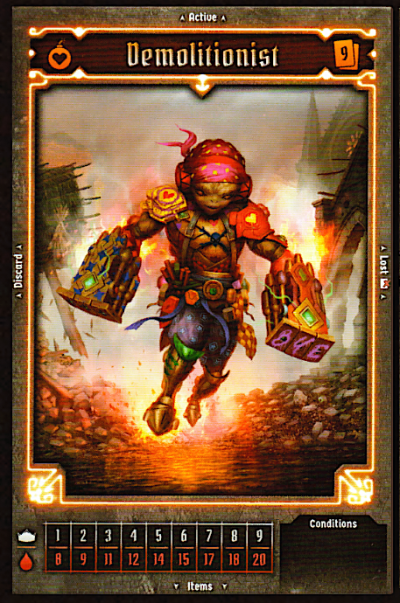 Even when augmenting themselves with machines of their own creation to destroy anything that stands in their path, Quatryls will still do it with charm and flair.Though they may be small, Demolitionists don’t let that hold them back in the least. Between their rocket boots, multitude of bombs, and giant piston fists, they are a force to be reckoned with. sometimes the only path forward is the one they create themselves. In such cases, it is best just to get out of their view.

A very juicy character and definitely in my style of play – a lot of close quarter attacks and some objects manipulation. What is more, it can both Strengthen itself as well as get a Bless. If you add to this Wind-up top (+2 to attack twice, non-burning) than you create a really great damage dealer!

The downside is pretty small hand – 9 cards only. However, only couple of actions are lost ones so with good hand management and Stamina Potions that character should be able to survive the scenario, although would be probably first to get exhausted. Still, I think it will be fun to play Demolitionist!

More next week, when I provide details of another two characters – Valrath Red Guard  and Inox Hatchet! See you!

Join 414 other subscribers
Follow The Boardgames Chronicle on WordPress.com