Skip to content
Date: May 10, 2020Author: The Boardgames Chronicle 0 Comments

I am continuing my social distancing solitaire plays – this time with Cataphract, one of the Great Battles of History installments. I really like the period described – late Roman and early Byzantine times, with great generals like Attila, Belisarius or Narses playing key roles. The impact of cavalry and introduction of composite bow really changed the battlefield dynamics and that game greatly depicts this. What follows is clash of Byzantine and Frank forces in mid 6th century in Italy.

The scenario I had chosen was: 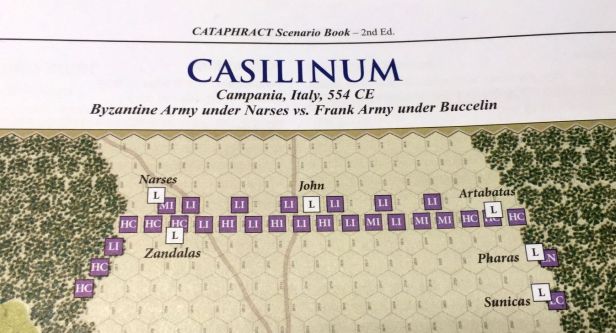 During the later stages of the Gothic War, the Ostrogoth king Teia called upon the Franks for help against the Byzantines under Narses. Although king Theodebald refused to send aid, he allowed two of his subjects, the Alamanni chieftains Leutharis (Lothar) and Butilinus (Buccelin), to cross into Italy. The two brothers gathered a host of 75,000 Franks and Alamanni, and in early 553 crossed the Alps, confident that they could overwhelm Narses, for whose military talents, eunuch and chamberlain as he was, they professed supreme contempt.

The two brothers advanced into central Italy. Buccelin had marched south towards Campania and he was finally persuaded by the Goths to risk an open battle with the Byzantine army which he tried to avoid until then. He encamped on the banks of the Vulturnus river, near modern Capua, and waited. Narses left Rome to meet him.

Narses, as usually, placed his cavalry on the two wings and the infantry in the center. Buccelin had drawn up his all-infantry army in the shape of a deep column, which should hit like a wedge through enemy lines. In this array the Franks attacked, armed with missile lances, swords, and axes, confident that they would sweep all before them at the first rush. They penetrated into the center of the Byzantine array, but there, found themselves between the cross-fire of the cavalry, who were all armed with bows. It was a complete annihilation. Buccelin was slain and only a handful escaped.

Anecdote: The army of the Franks was initially 75, 000 but one third was lost of dysentery which was caused by the consumption of ripe grapes

The ancient sources claim that only 8 Romans died while only 5 Franks survived. In my game the disproportion was not so vivid but still barbarians really did not stand a chance. That was a nice solo experience, especially when played with my young sons who love to roll for archery, charge and the clash of shields. Still, definitely not a good scenario for competitive play but a good history lesson.

Another fantastic Combat Commander Europe scenario and - despite the result - close game. Would Americans manage to crack the stiff resistance of Panzergrenadiers? Enjoy!
Part 3 - War Turn analysis - of How to Play Imperial Struggle series is out. I hope you will find it both helpful and interesting. Links to the Part 1 & 2 within the movie. Enjoy!
Let me present animated AARs for Memoir'44 Pacific Theater expansion. First three scenarios played, featuring Imperial Japanese Army vs US Marine Corps & Army. Enjoy!
Atlantic Chase by Jeremy White from GMT Games is a very innovative design focusing on Naval Warfare between German and British forces during 1939-1942 period. It features fantastic tutorial and great solo campaign. Today I am presenting unboxing and game components. The session reports will come!