Skip to content
Date: May 8, 2020Author: The Boardgames Chronicle 6 Comments

In this installment of my “My passion for History” series I would like to talk about another game by Paradox Interactive. Yes, video games, especially the ones allowing for the online play, are great way to spend time during forced lockdown and social distancing. And if you can learn some history in the meantime, or what is even better – alter it – that is great! Without further delay I invite you guys to… Hearts of Iron! 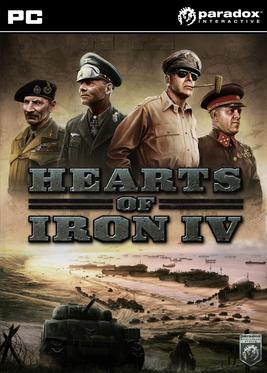 Hearts of Iron IV is another grand strategy video game developed and published by Paradox Interactive. It primarily revolves around World War II. The player may play as any nation in the world in the 1936 or 1939 start dates in singleplayer or multiplayer, although the game is not designed to go beyond 1948.

A nation’s military is divided between naval forces, aerial forces, and ground forces. For the ground forces, the player may train, customize, and command divisions consisting of various types of infantry, tanks, and other units. These divisions require equipment and manpower to fight properly. The navy and air force also require men and equipment, including the actual warships and warplanes that are used in combat. Equipment is produced by military factories, while ships are built by dockyards.

Most nations are initially forced to devote a significant number of their civilian factories to producing consumer goods, but as the nation becomes increasingly mobilized, more factories will be freed up for other purposes. Mobilization is represented as a “policy” that the player may adjust with the proper amount of political power, an abstract “resource” that is also used to appoint new ministers and change other facets of the nation’s government. In addition to mobilization, there are other policies, including the nation’s stance on conscription and commerce.

Sounds fascinating and a little complicated – Paradox games have a lot of factors influencing the game play and its mechanics – which usually result in fact they require a lot of patches 🙂 Still, they provide hours of fun both in single as well as in multiplayer formats.

If you read my first report, from Europa Universalis, you would recall that due to various reasons I was playing Hungary while my buddy, Krzysztof, Naples/Italy. Well, without much hesitation we decided not to change the winning set-up and try to play with those countries during WWII as depicted by HoI.

While Europa Universalis can be treated as economy/politics/warfare orientated game, in Hearts of Iron there are no such dilemmas – it is pure warfare, constant technology development and – if needed – proper defense strategy, even if this means a preemptive attack!

We played with Krzysztof for four years peacefully, developing our countries, until 1940 came and the German disastrous attack on France. They really handled it poorly and were stopped at the Maginot Line. So we decided to help – I attacked Yugoslavia (taking half of it) and Transylvania, while Krzysztof definitely won the race to Paris against Germans.

And now the inevitable questions – was it easy to achieve such results? No, under no circumstances that came without sweat, careful planning and moments of serious doubt. But it was worth it!

I will not reveal any great secret or deliver a surprising news when I will announce that Germans in the end finally attacked USSR and dragged Italy, Hungary and Romanian into this war. What was surprising, was complete inability of Wehrmacht to push forward. They were pretty quickly stopped and could do nothing.

Also, we were surprised by earlier then expected landing in Normandy – quickly handled by Krzysztof. But the worst had still to come:

Romania, which was part of our Axis block, completely collapsed under Soviet pressure and suddenly they were almost at the outskirts of Budapest! Only desperate fight of my infantry divisions and difficult terrain (Carpathian Mountains) stopped the onslaught. Uff, that was close!

“What doesn’t kill you makes you stronger” they say and it was truth also for us. Once we dealt with the “Romania crisis” we moved East, me through Ukraine and Belarus while Krzysztof through amphibious landing on Crimea:

We should not forget also the African front – here Italy (Krzysztof) was a real superpower, taking the land by hundreds of kilometres and totally crushing French and British resistance. Not bad for the successors of Caesar!

Year 1944 was at the same time a key, mind-blowing and crucial time of the war.Just look at what happened then:

We finished at this moment in time as the war was all but decided. The map looked wonderful what you can see above.

One question stays open and should be answered. What US did during whole this years? Well, with Krzysztof we went to great lengths, using diplomatic channels, to make sure America stays neutral. The propaganda worked and Yankees were happy with their isolation!

Another great episode in the series of “how to change history via Paradox video games“. Very exciting, very interesting and providing hours of fun for every history fan. Hope you also enjoyed the report!

Join 413 other subscribers
Follow The Boardgames Chronicle on WordPress.com