Well, that famous citation from James Bond is maybe too strong here, but I must admit that after finishing all official scenarios of CCA (that great moment was described here) I play less of CCA. However, from time to time it is good to come back to that game – especially in the variant I like the most – campaign games.

With my good, fellow CCA player – Marcin – we have chosen this time to reenact epic struggles of Germans and Roman legions in early first century AD. What would it be? Of course Teutoburger Wald and then the punitive expedition of Germanicus in 16 AD. I was playing as Romans, Marcin was responsible for Germans. And here is how it went.

So we started with the famous ambush, with Romans next to marshes and Germans prepared to strike from the hills (actually, they also built a rampart here) (click to enlarge):

In our game – which was unfortunately pretty quick – Germans attacked in the middle, striking there to right and left (click to enlarge):

I lead counter-charge with my cavalry but managed to score just 2 banners. Well, try as you may, it is hard to do anything in that scenario with Romans.

Historically, Romans were here in worse position then in first scenario – too few people to man the ramparts, most of the three legions already dead (click to enlarge):

However, the thing that worked well and in my favor was fact that Marcin decided to attack only on one wing, with part of his troops – and I managed to quickly regroup to endangered section. “Dance of death” started – as you can see below – and I proudly scored 4 banners before being overwhelmed…  (click to enlarge)

Key learning from that scenario is that you should move forward all the Germans and be ready to strike in multiple points so Romans cannot reinforce themselves.

“Varus, give me back my legions!” – cried emperor Augustus. But Varus was long dead and it was Germanicus who was tasked with leading the punitive expedition and revenge Arminius deception (click to enlarge):

Well, instead of being bogged down in the forest to the left of my forces, I gradually moved forward heavy legionaries in center / right to suddenly jump forward with double time. Rampart was helpful for Germans only for the moment, and when first have fallen, the slaughter began (click to enlarge): 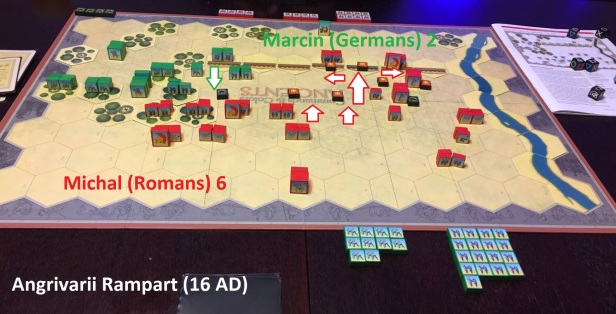 Marcin managed to save Arminius but the day was definitely won by Romans.

In summary, the banner count for mini-campaign looks 14 Marcin (Germans) vs 12 Michal (Romans) which is not bad result taking into account historical results 🙂 Next campaigns of course will follow 🙂

PS. If you would like to read other session reports from my blog in English, just click on following link or choose category: In English