Whenever I have wish to play the lighter wargames, with beautiful components, I am usually reaching for my small Academy Games collection. I love 878 Vikings and had a lot of fun with Storms of Steel, but so far was not able to organize 2-player game of Mare Nostrum. It changed recently as finally – thanks to Atlas Expansion – I was able to set-it up. More below! 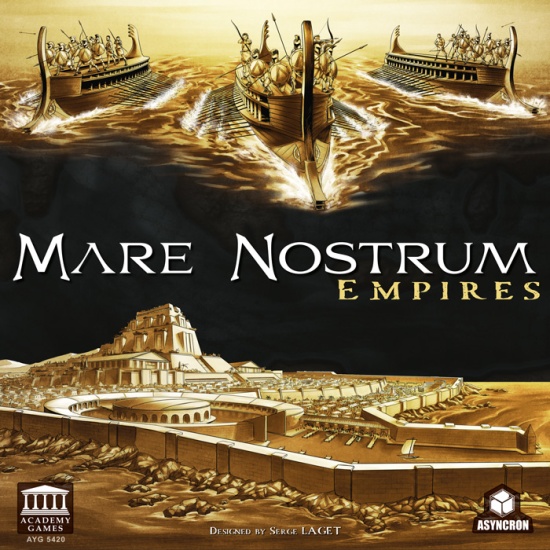 First and foremost, for those who does not know the game, couple of words of introduction. I will base it mainly on the developer’s site with some of my additional info.

Mare Nostrum is an empire-building game in which 3-5 players (or 2-6 with the ‘Atlas’ expansion 🙂 ) lead their individual ancient empires to dominion of Mare Nostrum – as ancient Romans called Mediterranean Sea. You grow the fame and glory of your empire by expanding your influence into new Provinces, then extending your Trade Caravans, building Markets, and founding new Cities and Temples. You can recruit Heroes and create Wonders to help your cause. But beware of your neighbors – they will look with envy at your success and might be tempted to forcibly stop them.

There is couple of ways to win, among them:

As you can see, there are different ways to gain the first place. Which will be yours?

As mentioned, the Atlas expansion brings the two-player variant – which allows us to step into the boots of either Republican Rome or Carthage led by Hannibal – yes, the era of Punic Wars! To spice-up the game and make it more interesting within the regular set of rules, there is also third nation – Barbarians. In historical terms they represent (I think) kingdom of Macedon and whoever pays them with gold, will be able to temporarily recruit their forces. It is such a fun to use those units – you really feel that somebody else is doing your dirty work. There are also changes to victory conditions, mainly the Conquest and Leadership – Control 4 Capital and/or Legendary Cities during one round and then hold them until the end of the next round’s Move & Battle Phase. In essence, it is not enough to successfully raid and occupy Rome or Carthage. You need also to withstand the inevitable counter-attack form the enemy.

Important to note is fact, that you do not need to purchase the expansion to play this variant! You have all the needed components in base game (just use the green army) and you can get scenario from Boardgamegeek, Atlas expansion rulebook.

Let me now describe main developments of our game – the numbers correspond to the map below:

The 2-player variant / scenario was a very enjoyable game. The rules are adjusted in a way that you simply cannot win by pure luck. You need to plan your actions and invest in economy in order to be able to outpace the opponent – what exactly happened in our game. We will for sure try again that set-up as there is still a lot we can try!

Join 398 other followers
Follow The Boardgames Chronicle on WordPress.com