As you know, I like discovering and testing new wargames. Recently I started with ONUS! Rome Vs Carthage and have already two sessions played. Let us again look again into that small but interesting game. 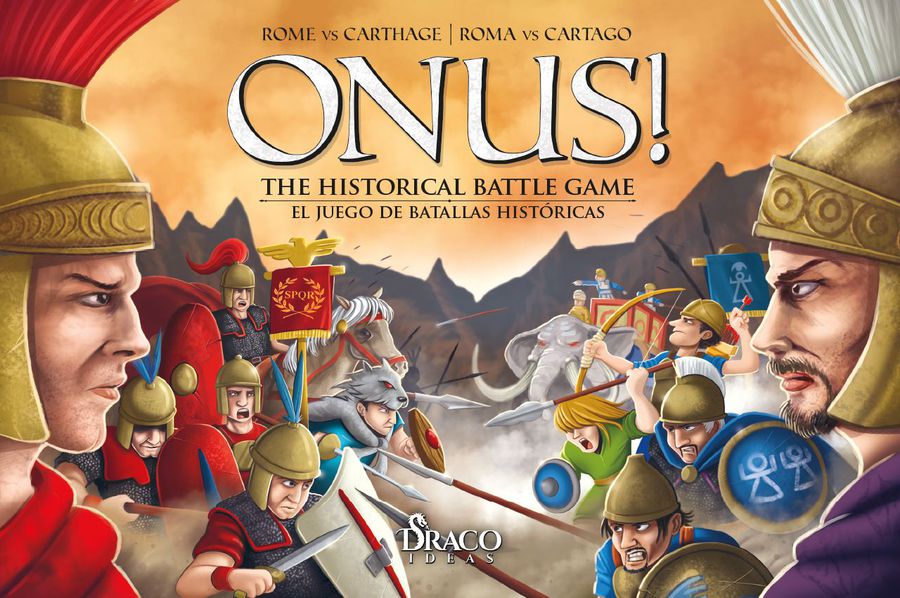 As already written in my previous post, that war game is similar to miniatures games – but using cards for space and economic reasons. We have here combined concept of orders and events cards, that makes each game different and each combat unpredictable.

Units are depicted by cards which are in scale of a Century. They represent infantry, cavalry and elephants formations. Each units have their own set of traits, like Melee Combat, Range Attack, Defensive capacity, Morale and Life, and Movement capacity.

Also, all units have their unique set of skills to represent specific abilities. To win, you need to route enough enemy units to break their morale.

The Second Punic War (218 to 201 BC) was the second of three clashes between ancient Carthage and the Roman Republic. That war is famous in contemporary history mainly due to the presence of Hannibal, his march from victory to victory and unbelievable resurrection of Romans who in the end managed to win that gigantic struggle after 17 years of merciless fight. Some of the battles like Lake Trasimene (largest ambush in military history), Cannae (one of largest military defeats foe Rome ever) or Zama (final face-down between Scipio Africanis and Hannibal) were inspiration for generations of generals to come.

The Battle of the Ticinus River was another one of the great Hannibal victories in the wake of Second Punic War. As described by ancient historians: The battle took place in the flat country of Pavia county on the right bank of the Ticino River. It was the first battle of the war against the Romans that was fought on Italian soil and the first battle of the war to employ legion-sized forces. Its loss by the Romans, and the temporary disablement of Scipio’s command, set the stage for the Roman disaster at the Battle of the Trebia in December.

This battle was mainly a cavalry engagement. It was so fast-moving that the javelin-throwers deployed by the Romans had no chance of throwing even a single volley and milled around on the field, a major cause of the Roman defeat. Scipio was wounded and barely escaped with his life. He was in fact rescued on the field by his 18-year-old son, the later Scipio Africanus.

So the stage is set and you are in command to change the history! In that epic endeavor, I was leading Romans, destined to fail while Marcin was commanding Carthaginian forces:

In essence, we have here a large skirmish rather than a full-scale battle which is also evident in the number of units taking part. Carthage has only cavalry, Romans – some cavalry and light unis.

In our game I was quickly pinned down by Marcin’s forces, but managed to relocate the javelin-throwers forward (in the center) plus use my only heavy cavalry to attack (on left flank):

Attack, counter-attack, another attack – the situation became so confused, that we end-up in below entanglement – which, ironically, none of below units would survive:

In general, due to the fact that majority of units on the battlefield were well-equipped in weapons, many more units were being killed then defeated and routed due to cohesion hits. To extent that at the end of the game only Hannibal survived on Carthage side plus four of my battered units.

So, the time has come for the last, epic charge of the famous Punic general who almost killed my general, achieving the automatic victory. The word “almost” is key here, as in the aftermath, I was Hannibal who has fallen and his forces un-historically were defeated.

It was a real fun to play that game and even some ambiguities in the rules did not prevent it. I hope more sessions will happen soon!

4 thoughts on “Onus – another encounter with 2nd Punic War”

Join 414 other subscribers
Follow The Boardgames Chronicle on WordPress.com