Today I would like to describe shortly one of our Tide of Iron sessions – the scenario “Shootout in Cecina” – based on authentic encounter of US and German forces in Italian town Cecina during July 1st 1944. This time we have chosen definitively panzer firefight:

Please have a look at the set-up – both sides attack the Cecina town (it is like Recon encounter in Combat Commander Europe) where tons of victory points are located. The scenario is planned for 8 turns, but if you are ahead more then 1 point you win automatically – that represents morale effect, critical in that skirmish. So there is no time to loose, just attack!

There was no fight, everybody just positioned its forces for next-turn attack. 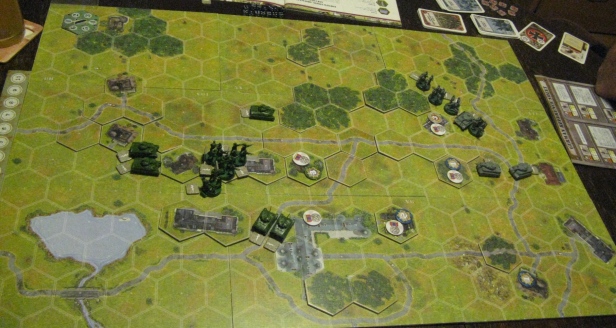 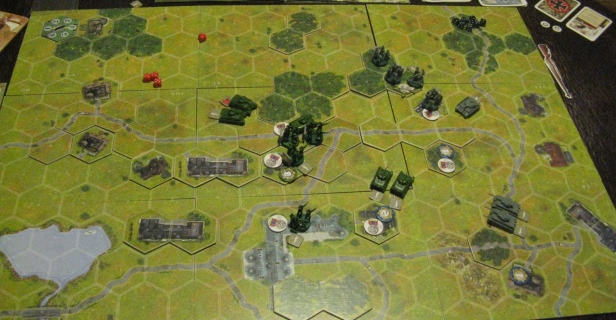 US forces attack and takes two victory points to which Germans respond with occupying one. Axis infantry is very lucky – despite 24 attack rolls (and only 12 defense) it leaves fight unscratched! US strategy was clever – as it would give them automatic victory should they throw out that infantry. But the also put them in vulnerable position for next turn…

Well, that was complicated turn.

First, there was some discussion regarding flamethrowers purchase for my units – we mixed up the turn sequence a little here…. Then Germans opened a devastating fire, destroying 1 of my Shermans and immobilizing two others.

At this moment there was only one choice for me (US) – a desperate, suicidal attack on fascists-held victory point. That was successful, and resulted in 6-3 victory points ration for US at the end of turn – automatic victory.

US won but paid a heavy price for this!

2 thoughts on “[ENG] Tide of Iron – Panzers in action”