Over a week ago I and my fellow boardgame companion – Marcin – had pleasure to play once again the Hannibal game. You can familiarize yourself with our first experiences HERE. We agreed this time to switch sides and I took responsibility for Hannibal and Carthage while Marcin was commanding Rome.

The plan was to try the main scenario again- 01. Second Punic War (218-201 BC). The situation on map is still open, all decisions are possible and – in my opinion – this is how the game was designed to be played. So let us begin!

The initial set-up on the map is following – you can always click on image to enlarge it: 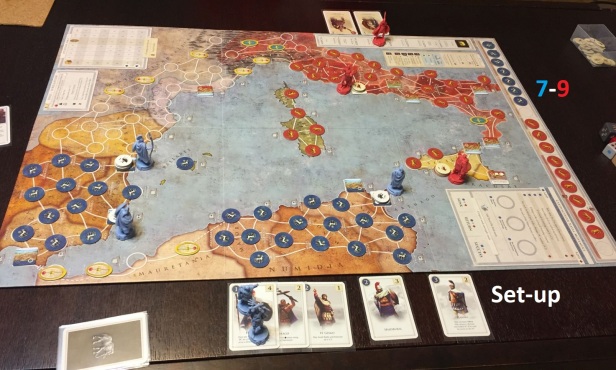 The numbers visible in the upper right corner show the score in provincial control of Carthage and Rome – which is at the same time Victory Points Track. At the beginning descendants of Romulus have two provinces more under they yoke thus Carthage needs to move decisively forward.

Disclaimer: we are still learning this game. We committed umpteen number of mistakes and errors in our game – that did not hinder fun from playing, but definitely before the next game we will again, end-to-end, read the Rulebook.

Let us have a look at main developments of Turn 1 – despite the actual history, that was mainly Roman aggression turn:

(1) Crazy Longus – that is how they later called him. The Roman general, who using the rebellion in Numidia Minor and Naval supremacy of Rome, managed to wreck chaos in the political situation in North Africa without regard for his personal safety – some sources says, to the level of insanity. However, he accomplished his deed – just have a look how many Political Control Tokens are red in Africa!

(3) At the same time Syracuse – due to treachery – defects to Carthaginian side!

As for the political control, Carthage still is behind, but only by one point, 8 – 9.

Now a lot of things start to happen simultaneously.

(4) Hannibal and Publius Cornelius Scipio are opponents in a large battle, which, to everybody’s surprise, is lost by Hannibal. Unfortunately, couple of events decreased the Punic army by 40% and even the strategic genius of one-eyed general was not helpful here – simply, there was not enough manpower:

(5) At the same time Carthage Senate recalls Hasdrubal (Hannibal brother) from Spain to get rid off Roman presence in North Africa (Crazy Lonus and his successor). Three bloody battles reduce Roman army to 1 unit but general manages to escape:

(6) Syracuse is besieged by Romans.

In political control draw – 9-9 – it is getting interesting!

(7) Hannibal – after rebuilding the forces – lands in Sicily and tries to take control of the island. In vain again..

(8) Last but not least, the Republic with help of the ingenious besiege master – Marcellus – retakes Syracuse for Rome!

(9) Finally, the rebellion in North Africa is put down – control of those provinces comes back to Carthage. But in  thefuture it will switch sides time and again.

(10) Romans start to advance through Alpes taking control of nearby tribes.

Despite all the set-backs, Carthage keeps the political score at draw (8-8) which, as per game rules, is Punic victory!

In general, this is a calm turn, focused on rebuilding the forces and preparation for the next rounds.

(11) Corsica and Sardinia are taken over by Carthage!

(12) Numidia Minor also comes back to Carthage – a good political round for Africans!

And the political score stays at draw, 9-9.

(14) The hostilities resume! Hannibal ante portas! Well, actually not so close to Rome – practically just crossed the Alps, but was caught by Consul Nero in an unfavorable situation – in a mountain valley, with a retreat blocked by a snowy pass. The battle turns suddenly and most unexpectedly into rout of Carthage units. Third battle and third defeat – Hannibal this time will not survive and the great general is killed in Alps! Congratulations to Marcin – this is a great Roman victory!

(15) Nero (Marcin) is over-confident which almost costed him life. He is caught by Mago (Michal) in Spain province of Idubeda and crushed down to 1 Combat Unit – but manages to escape…

(16) And the final blow for Punic case, the Numidias revolt… Cannot be worse, can it? Oh it can, just wait…

What a calamity for Carthage! Will the manage to raise again? Politically they still hold (8-9) but morale is crushed.

(16) When it seems that nothing worse can happen to Carthage, Proconsul Scipo Africanus – with 5 Combat Units – appears in Italy…

(17) Still, Hannibal’s brother Hasdrubal decides to take the matters in his own hands and musters mighty, 10 Combat Units strong, army in Spain. With 4 Allies there he can defy even the mighty Scipo if a need arises!

(18) Numida Major – historically – turns toward Rome, who controls it now politically. That changes the victory points (province control) situation to a definite advantage of Rome: 10-8.

(19) The stalemate in Spain continues – neither side is willing to commit troops and musters even more reinforcements.

(20) Rome grows impatient and overconfident. Consul Nero – who dispatched Hannibal and almost died at the hand of Mago – lands in Africa, in Numidia Maior. He is quickly checked by Hanno and his mighty army – again, third time in a row, Roman general survives with 1 Combat Unit only:

(21) After this crushing victory Hanno turns both Numidias again under Punic control. Politically it is again a draw (9-9)!

(22) Crazy things start to happen – first (now we know, illegally) Scipo Africanus and Marcellus – each with 10 CUs – lands in Africa, besieging Carthage: 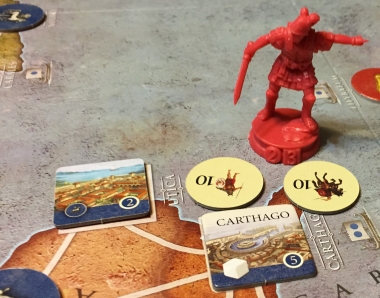 Then Hanno, Mago and Hamilcar declare 3 battles to lift the siege – some of them coordinated (another illegal move). However, they fail to do so and expert besieger – and definitely best general in Marcin army – Marcellus – breaches walls of Carthage, burning the city to the ground:

Well, if not for our mistakes the war would finish much sooner – with Carthage collapse due to political consequences of the lost battles. Also, the last struggle (20 units vs 18) was not possible but very exciting and interesting 🙂 The game is moderately complex, needs experience and more plays to master, which we will for sure plan!